Sequences Related to the Work of Srinivasa Ramanujan

As Matt Parker described in this video, the "taxicab number" 1729 (equal to 103+93, and also to 123+1) appears in "Ramanujan's lost notebook", along with formulas for a lot of similar but larger numbers.

Amazingly, though these formulas have been discussed extensively and some of the formulas have been iterated beyond Ramanujan's examples, half of them have not been extended, including the ones of which 1729 is the first example. See the references section for details.

I'll refer to the terms a0, a1, a2, a3, ... as Ramanujan's "a-series". They are the coefficients of a Taylor series, which is a power series in positive exponents of x that approximates the ratio of polynomials on the left side of equation (i), and which converges when x is near 0. The first three terms are 1, 135, and 11161. Once the first three are known, the rest can be computed by the recurrence relation:

Since their generating functions have the same denominator 1-82x-82x2+x3, we know that the b and c coefficients can be computed the same way. In the OEIS they are:

A limited number of terms can also be computed by the "magic decimal digits" method that I describe here, wherein one substitutes a very small power of 10 (like 10-10) for x, and then computes the decimal digits of that ratio of polynomials. For example, the a-series:

We can think of these coefficients as being the terms of a, b and c that come "before" the terms we computed above, and to do that we just turn the recurrence relation around:

These are clearly Ramanujan's α coefficients with minus signs. (Without the signs, they are OEIS sequence A272853.)

Similarly we can compute the β and γ series, except that we do not get minus signs:

Notice that that the β terms come from reversing the c-series:

and similarly, we get the γ terms by reversing the b-series:

Ramanujan seems to have switched β with γ in the final statement, which "should" be:

To see what happened, let's restore the unexplained minus sign to the α series coefficients, and leave β and γ as Ramanujan wrote them. If we also change the sign before the (-1)3, we get this:

You can verify this for yourself. First, see the original in Ramanujan's writing.

Then convert the generating functions into a series sum of negative powers of x. There are four ways to do this:

1. Laurent series expansion with symbolic maths software. Use Wolfram|Alpha with the input expressions I gave above. Similar commands should work in Mathematica.

2. Reverse the recurrence formulas, as shown above, to derive the terms of the an, bn, and cn series terms for negative n.

4. The α, β, and γ series terms can also be seen by substituting a large power of 10 for x and evaluating the generating function's polynomials numerically to high precision. For example, if x=1010 we get:

The first set of three highlighted coefficients give the famous relation 93+103=123+1; these and the next two sets are given as examples in Ramanujan's notebook; the 4th set represents the relation:

Among these references, all that mention Ramanujan pertain only to the a-, b-, and c-series. Amazingly I have found nothing online (except on this page and my numbers pages) about Ramanjuan's α, β, or γ series and that explicitly give terms beyond those in Ramanujan's notebook. 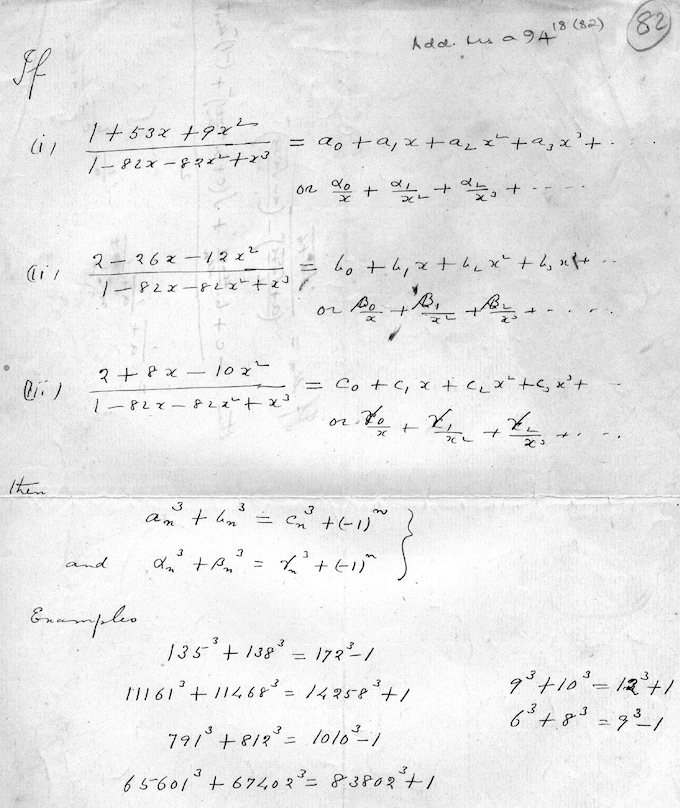 This page was written in the "embarrassingly readable" markup language RHTF, and was last updated on 2020 Mar 26.