The numbers Googol and Googolplex

(You might also wish to view googol and googolplex in context on my numbers page; or on my large numbers page as examples of class 2 and class 3 numbers; and to make calculations involving these numbers, use Hypercalc.)

10100 can be called "ten duotrigintillion" by the standard Chuquet system, but is better known by the name googol. This is perhaps the best-known example of a number that was "invented" just for the purpose of being large. Only slightly less well-known is the much larger googolplex.

Mathematician Edward Kasner [2] asked his nephew Milton Sirotta (who was 9 years old at the time) to invent a name for the number 1 with a hundred zeros written after it, and the nephew chose the name "googol". As Kasner's telling of the story goes,

The name "googolplex" was invented at the same time, and also by Milton Sirotta if we trust the grammatical implication of the wording in [2]. An article by Carl Bialik [6] gives more background and suggests a date for the invention of these words being in the 1920's. Regarding its definition, Kasner wrote:

It was first suggested that a googolplex should be 1, followed by writing zeros until you got tired. [...] It would never do to have [contemporary boxing champion Primo] Carnera [be] a better mathematician than Dr. Einstein, simply because he had more endurance. [and so it was decided that googolplex should be] a specific finite number, with so many zeros after the 1 that the number of zeros is a googol.
— Edward Kasner [2]

A generation later, googol had been popularized enough to be able to reach audiences of the widely-distributed Peanuts comic strip in which Schroeder estimates Lucy's odds of eventually marrying him as "Oh, I'd say about 'googol' to one": 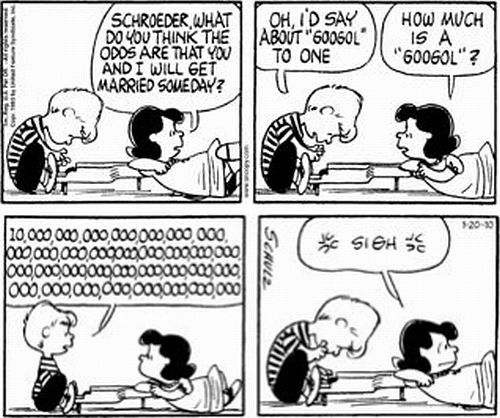 This Peanuts strip (first run on January 23, 1963) easily broke the record for the largest number explicitly written out in a mainstream comic strip, although I suspect that may have been surpassed recently by the nerd-friendly populist Foxtrot. If you don't care about type of representation, then the current record-holder would probably be the 3rd panel of xkcd 207. (There are many other poetry and lyric references on my main numbers pages including 525600, 8675309, 1010, 1011, 1027 and 1010000000000.)

Carl Sagan tells of the invention of Googol in the 1980 TV series Cosmos, then goes on to discuss googolplex.

The name of the company Google derives from "googol". The choice of a name for the search engine (a name change from the earlier "BackRub", which referred to URL "back links") was an intentional allusion to the large number; this "fit well with [the] goal of building very large-scale search engines" (in the words of its founders according to [7]).

Googol Learning Enterprises uses birdlike puppet characters called "Googols" to teach children about mathematics and related topics. Their What's a Googol? page has a video of two of them teaching the meanings of Googol, Googolplex and Infinity.

There are many references to googol in popular culture (most are since the late 1990's). The following examples are from the Wikipedia page on googol as it existed in early 2010:

For many people, Googolplex is the largest number with a name. Like googol it is a number that was "invented" just for the purpose of being large. As described under the googol entry, credit for the invention of the -plex suffix is indeterminate. See [4] for more about this number.

In the 1980 TV series Cosmos, in the episode called Lives of the Stars*, Carl Sagan spends some time talking about large numbers. He points out that googolplex has so many zeros that there is not enough room to write out all the zeros even in the entire volume of the known universe, and also comments that "A googolplex is precisely as far from infinity as the number one". [3].

Google's headquarters in California is referred to as the Googleplex, an inside joke and etymological back-formation (see above).

In The Simpsons, the family sometimes sees a movie at the "Springfield Googolplex" theatres, a humorous reference to multiplex, megaplex, and the general trend towards theatres with more screens (each of which is often smaller). Carrying the idea to a (fictitious) extreme, the G∞golplex Theaters website 1 suggests that each patron can see a different movie through the use of virtual reality headsets:

Googolplex Theaters was founded in Milwaukee, Wisconsin in 1994 by visionary cinema mogul Bob Googol. Recognizing the trend toward placing ever-more screens under one roof, he conceived of a theater where the number of screens was limited only by the number of patrons.

Most googol-lore comes from the number's appeal as a representative huge number; see my large numbers page for many more including the Skewes numbers, the mega and moser, and the Graham-Rothschild number.

Fred Adams of the University of Michican explains that the heat-death of the universe would take at least as long as the evaporation time of the largest black holes. Since the largest black holes (with "the mass of a galaxy") would take 1098 years to evaporate, Adams says that "a good bet" for the time until the heat-death of the universe is about 10100 years (see Future of an expanding universe).

Googolplex is a number far too big to relate to anything physical — or is it?

Many large numbers come up in the study of combinations, such as the number of ways to shuffle a deck of 52 cards (8.065817...×1067) or the number of ways to arrange 5.9 billion nucleotide base-pairs into 46 chromosomes (3.01607×103576838408). A combinatoric interpretation is perhaps the easiest way to approach a physical interpretation of googolplex.

Just after introducing googol and googolplex and their definitions, Kasner and Newman [2] contemplate the odds of a book, suspended from a person's hand by a string, spontaneously jumping up into the hand by cooperative action of the Brownian motion of many individual molecules in the surrounding air. The odds of such an event happening during one's lifetime is given as "between 1/googol and 1/googolplex".

More recently, through the work of Stephen Hawking and many others, it has been possible to make more precise definitions of combinatoric numbers involving large physical objects such as stars, black holes and galaxies. The following description comes from Don Page via Frank Pilhofer [4], and is highly paraphrased:

Quantum physicists talk about distinct and indistinct states, overlapping wave functions and many other things. One of the important principles of such "quantum indeterminacy" concerns how much time it takes for a system with many possible states to spontaneously assume a certain, given state.

For simplicity it is imagined that the "system" (usually some set of particles) is inside an impermeable, rigid box (to prevent anything from going in or out, even "information" or a "measurement" in the quantum mechanical sense). If you're outside the box you have no idea what's inside, and any state can spontaneously occur (even a higher-energy state).

For example, if the system is a proton and an electron, the possible states include: A hydrogen atom, a hydrogen atom with the electron in a higher "shell", a separate proton and electron, a neutron, or many other things. The amount of time you might have to wait for one of these states to occur depends on the number of possible states, which depends on the number of particles inside.

Cosmologists and physicists often use these concepts to discuss what might happen inside black holes. In practical terms the inside of a black hole is isolated from us (nothing can get out), but for this thouht experiment we still place it inside a rigid nonpermeable box, so that nothing new goes into the system, and ensuring that all Hawking radiation remains in the system. Like any other isolated system, one can talk about all the possible states that might exist and how long it might take for a certain state to arise. In theory, the contents of the box will at some point in the future cease to be a black hole and instead be real matter.

The formula for the number of possible states is a really big exponential function with Planck constants in it and other such things. To get a googolplex states, we need a black hole with a mass about 4.685×1011 times that of the Sun. This mass is conveniently just about equal to that of the Milky Way Galaxy (see [5] or Wikipedia). The number of states of such a black hole is somewhere around a googolplex, and in a comparable amount of time it would be expected to take on all possible states. It's such a big number that it doesn't even matter what units you use — a googolplex seconds, a googolplex millennia, or whatever — is the amount of time you'd have to wait for the contents of an impermeable, rigid box containing a black hole with the mass of the Milky Way to spontaneously become identical to the actual Milky Way as we know it.

It is natural to think of the -plex at the end of googolplex as being a suffix that means "10 to the power of" whatever the suffix has been added to. That implies names like millionplex for 101000000 and googolplexplex for 101010100.

Googol and Googolplex as examples of "power towers"

1 : (a creation of Kelson Vibber, at his "Hyperborea" website and formerly at www.googolplextheaters.com)

[2] Kasner and Newman, Mathematics and the Imagination, (Simon and Schuster, New York) 1940 (also republished in 1989 and in 2001). The story can also be found online — search for Googol plus the leading sentence "Words of wisdom are spoken by children at least as often as by scientists."

[3] Carl Sagan, Ann Druyan and Steven Soter (creators), Cosmos: a Personal Voyage (television series), 1980. The first several minutes of episode 9 discusses googol and googolplex; it may be available here: Lives of the Stars.

[6] Carl Bialik, There Could Be No Google Without Edward Kasner, Wall Street Journal online, 2004 June 14.


This page was written in the "embarrassingly readable" markup language RHTF, and was last updated on 2022 Aug 05.