An internal angle is a rational fraction, such as 13/21, used to name a secondary continental mu-atom.

By extension, an internal angle is a rational fraction used to name any child of a given mu-atom.

The term internal argument is sometimes used as a synonym.

The fractions in the R2-names in the figure below are internal angles; there is a table in the secondary continental mu-atom article giving a lot more.

For any two relatively prime integers N and M, with N less than M, there is a mu-atom of period M located at "internal angle" N/M on the main cardioid. The internal angles start at 0, at the cusp, and increase counterclockwise. 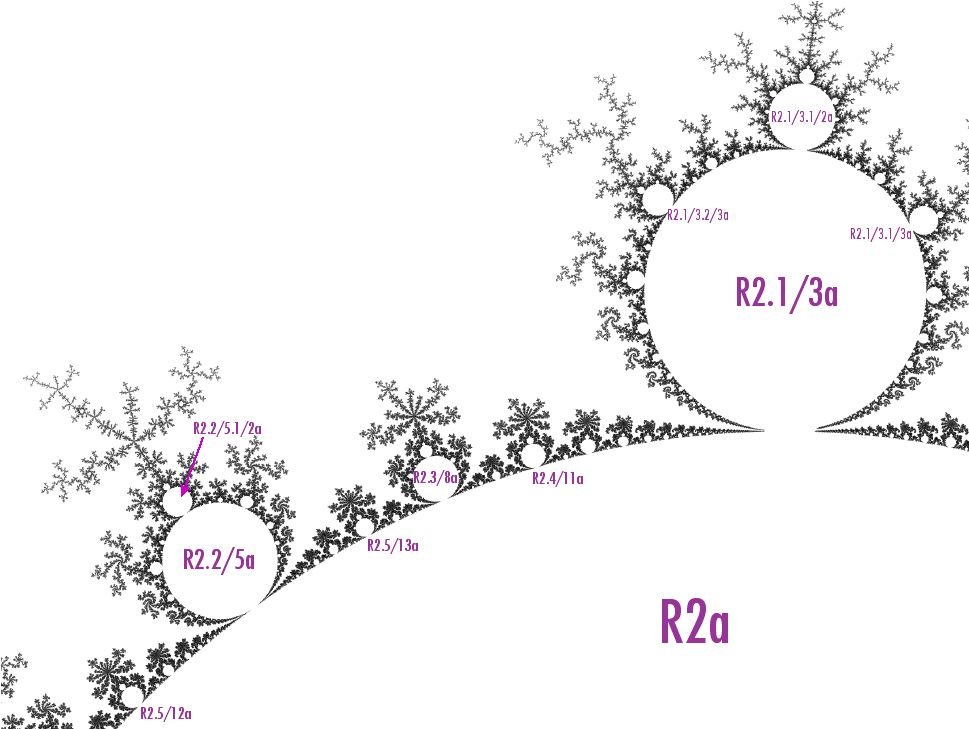 You can also "read" the internal angle off the mu-atom's filaments by counting branches counterclockwise from the smallest branch to the mu-atom. For example, look at R2F(5/8B). The main branch point has 8 branches — that's the denominator of the internal angle. The "shortest" filament points down from the center, and the inward-leading branch extends to the upper-right (and has the rest of the Mandelbrot set attached to it). Count counterclockwise from the inward branch to the shortest branch, and you get 5 — that's the numerator.

From the Mandelbrot Set Glossary and Encyclopedia, by Robert Munafo, (c) 1987-2022.     Mu-ency index
This page was written in the "embarrassingly readable" markup language RHTF, and was last updated on 2012 Apr 17.