A colloquial direction and directional modifier used in either of two ways:

1. The direction in which the imaginary coordinate decreases towards negative infinity. Also called Down.

2. Relative to a mu-molecule, refers to the same side or direction as that mu-molecule's .2/3 radical. For example, in the image of R2F(1/3B1)S, the south direction is towards the lower-left corner of the image.

The term is often used as a modifier with e.g. cusp or radical. For example, "the south radical" is R2.2/3 — here "south" refers to a lower imaginary coordinate.

However, a mu-molecule can "point" in any direction, for example R2F(2/5B2)S (the largest of the mu-molecules shown in the R2.2/5a article) points to the east: 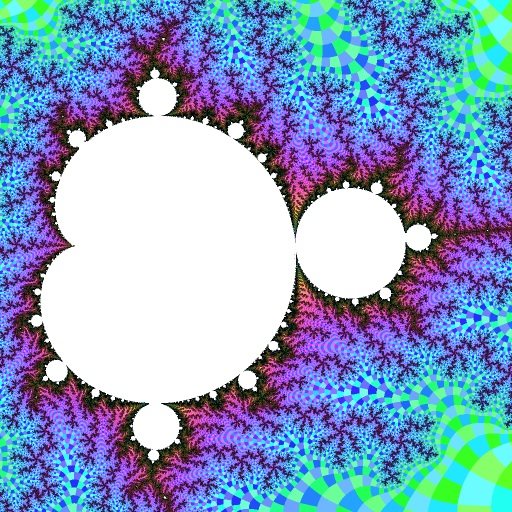 Thus, "the south radical of R2F(2/5B2)S" is a feature in the upper part the image. In this case the direction "south" is relative.

The south external angle is 3/4, and the filament subset operator for the filament off the southern side of a mu-molecule is FS[(2/3B1)t] (which can be abbreviated FS[2/3]).

From the Mandelbrot Set Glossary and Encyclopedia, by Robert Munafo, (c) 1987-2022.     Mu-ency index
This page was written in the "embarrassingly readable" markup language RHTF, and was last updated on 2012 Apr 16.